A conversation about endometriosis during COVID

For over 10 years now endometriosis has impacted my health and well-being. On the 22nd February 2021, I had my third laparoscopy for the condition. In 2018 I had two within 6 months, I was in hospital for 6 days after the second, so I was daunted by the prospect of having to do it all again during a pandemic. With no visitors allowed and social distancing measures meaning you aren’t able to interact as easily, I questioned whether I had the strength to mentally pull myself through this ordeal again.

I’d been going back and forth for scans since August 2020, the process was a lot slower because of the pandemic. With the strain on the NHS, I tried to keep calm about the waiting times and focused on mindfulness to cope with the stress (something I’m not normally very good at!) In January, a scan revealed a 7cm cyst filled with 100ml of fluid inside my ovary. I could also sense the endometriosis might be elsewhere in my body, I was getting reoccurring problems with UTIs, bloating and 24-hour cramps that fluctuated for months, whether I was on my period or not!

3 days before surgery, I had a COVID test then isolated at home. My mental health really suffered after my last surgeries, I was struggling with the diagnosis and having had two ops within a short space of time, I spiralled with negativity over the lack of control I had of my body.

This time I was determined to have a more positive mindset, it was important to me to find healthier ways to prep pre- and post-op. In the past, I haven’t been great with my communication and often not specified what I’ve needed. This time, I felt it was important to tell people that I was a) having the surgery in the first place and b) would definitely love a facetime whilst I’m recovering. Having a chronic illness can be extremely isolating, I often cover up my emotions or explanations of endo with jokes, in order to try and not sound too intense or hard done by.  Over the years, I’ve found that this actually hinders the situation because in a way, you’re falsely advertising that you’re fine and don’t need the support.

Asking people to be there, even if it was virtually, was an important step in navigating surgery in amongst the isolation of the pandemic. Step two was navigating a stress relieving bedtime routine. I’d lie awake for hours worrying: Will I lose my ovary? Has it grown any bigger? What if it ruptures? Why have I been cursed with endo?! Instead of focusing on things I couldn’t fix, I made a gratitude journal to try and look at positives from the week that I was barely focusing on. I made sure to keep up weekly therapy appointments to offload. Even though the pain can be so debilitating, I tried not to get swept up in my emotions of catastrophising my whole life and blamed it on bad endo days instead.

On the surgery day itself, I prepped my ipad full of downloaded shows to distract myself! I text the ward number and a rough surgery time to my family so they could check in later. The hospital was very busy, the op was pushed back so I had to wait about 5 hours before I was taken down to theatre.  Despite this, no measures were missed in comparison to pre pandemic surgery, I didn’t once feel that the pandemic impacted on the quality of care.  Masks did have to go on each time someone entered the room, but it was allowed to stay off during recovery.

The cyst and endometriosis were successfully removed. I wasn’t able to text my family when I woke up as I felt too unwell, I was going to send them a photo to show I was okay instead, but I looked so horrendous I knew they’d worry and thought otherwise! I waited until the next day as the nurse said she’d spoken to them which made me feel better.

I was able to come home the following day, which was a shorter stint in hospital than I’ve been used to! I’m now resting up at home and due for a follow up in 6 weeks. I’d say that this time, I’ve been a lot more vocal in asking people to keep me company during my recovery. The isolation of feeling horrendously unwell and alone was the main issue last time and making that change made all the difference. I also tried to flip my negative thoughts about having surgery into thinking: ‘But isn’t that great because soon you’ll feel better again?’

The specialist came to see me in the morning and had told me that I was spot on with knowing my own body, I’d had a sense of exactly what was wrong before I’d even had the scan.  “I’ll always believe you when come to see me about your endometriosis” he said. This means everything.  I often get tired and disheartened having to explain the condition to people in amongst the ‘I’m sure it will go away soon’, ‘you should have children…now’, and the ‘it’s just a period’ comments.

Never go against your gut, you know your body better than anyone. It’s okay to ask for help, without doing so we won’t get the support we need. Never give up, we’re in this together and together we will be seen. 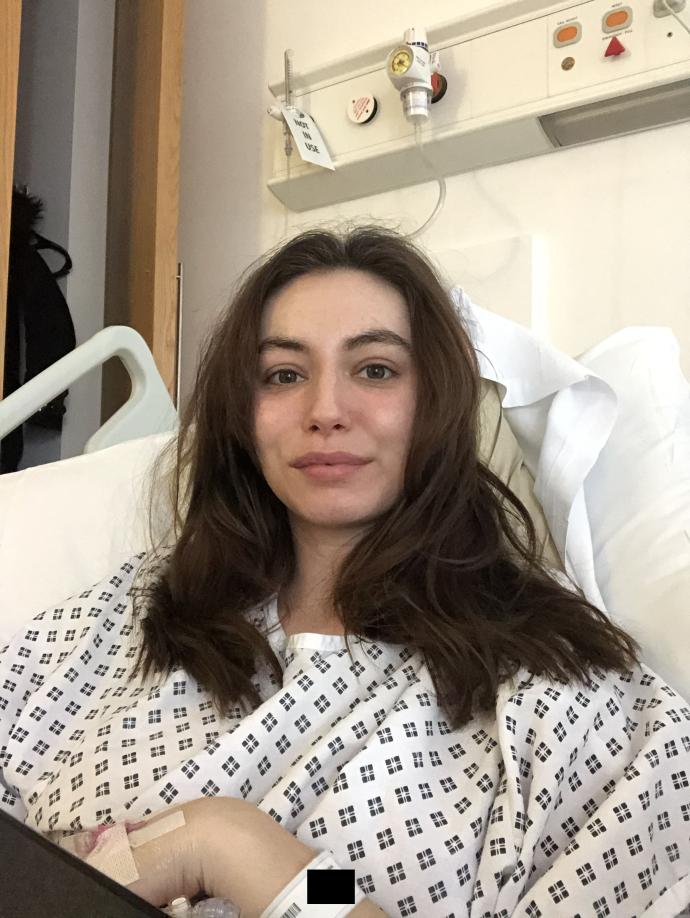