On your bike: Surgeons to take on 220 mile cycle ride for Endometriosis UK 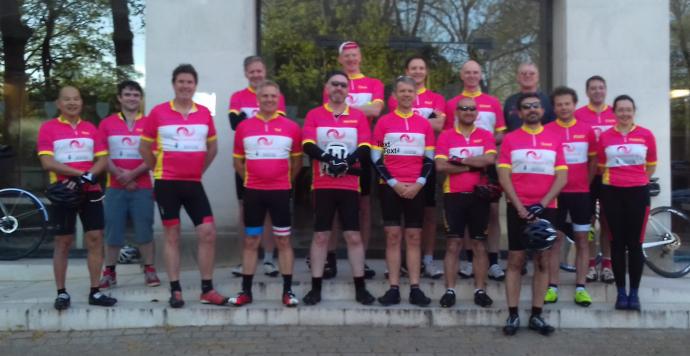 On 18th May, a group of 11 surgeons and endometriosis specialists will cycle 220 miles in two days to raise money for Endometriosis UK. From London to Newport (where the annual British Society for Gynaecological Endoscopy (BSGE) conference takes place), the cyclists will stop off at least 7 endometriosis centres and finish at the University Hospital of Wales in Cardiff.

Last year, the cyclists raised over £15,000 for Endometriosis UK and they’re hoping to top this this year by taking to the cycle lanes once again!

We caught up with Chris Hardwick, who will be leading the team of specialists to hear why he’s raising money for Endometriosis UK and how he’s been getting on with training.

To sponsor the surgeons, go to their fundraising page at: https://uk.virginmoneygiving.com/team_endo_uk

What inspired you to do the cycle race?

How far will you be cycling?

We will ride about 220 miles taking a route that passes as many BSGE endometriosis centres as possible. These centres are recognised for their quality of care in managing women with endometriosis.

Can you tell us anything funny that happened last time round?

Lutfi did a great job last year keeping us off major roads. However we ended up on a dirt track in the Yorkshire dales that got steeper and steeper until we ended up carrying out bikes and climbing down the side of a waterfall over rocks, all watched by people out for Sunday barbeques!

We all have different abilities and are of differing levels of fitness. Partly we need to exercise for fitness but also need to spend hours on a bike getting used to riding for long periods. Each day will be cycling about 8 hours as we travel at the speed of our slowest rider. Without teamwork and riding together we will fail.

How much are you hoping to raise?

Ah that would be telling. I would like to be able to raise enough to make some  difference to women helped by Endometriosis UK.

Why should people raise money for Endometriosis UK?

You must know first-hand the impact endometriosis has on someone’s life. What’s your advice to anyone who might be suffering?

Get help. No one has all the answers and no one can cure it simply so take what you can from as many people as possible. A shortened list would include GP, gynaecologist, practice nurse, endometriosis nurse, local support groups, pain specialists, psychologists, physiotherapists!

How can people support you during the race?

We love to see people along the way and last year the unexpected kindness of people in cars, people in cafes and shops was really touching. If we met Endometriosis UK volunteers or endometriosis centres, then that would lift our spirits. The ride will be a big challenge of all of us and for some is the most ambitious exercise challenge we have attempted. We have 2 support cars, one is a van with our luggage which doubles as a photo van driven by our colleague Richard Penketh who is a gynaecologist in Cardiff. The other is our feeding van which is driven by endometriosis specialist Liz Bruen from Cardiff. She is priceless.