There are no upcoming sessions at this time. Please check back again. 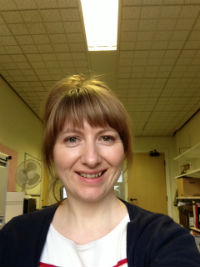 I was diagnosed with endometriosis in 2010, aged 37, during treatment for infertility. After successfully conceiving after a laparoscopy, I found that my endometriosis worsened when I finished breastfeeding resulting in a hysterectomy and bowel resection at 40. I joined the support group after my operation and found it really helpful so when Meg advertised for more people to help out, I really wanted to help other people with endo.

Right from when I was a teenager, I have always had menstrual pains, it got worse when I got into my twenties. I had heavy bleeding and severe abdominal pains. I was also misdiagnosed with appendicitis. Over the last ten years, endometriosis affected me terribly. I was diagnosed officially in 2016 but have been having the symptoms since 2009. Firstly, I had severe pains and not only during my periods but all the time. The pain spread from my abdomen to my pelvic area down to my legs, lower back and thighs. Within the last five years I had undergone five major surgeries.

It was a very isolating experience due to the low level of awareness especially among black and minority women. I am passionate about creating awareness among black and minority ethnic women like me who are going through similar issues because endometriosis can be a very isolating and traumatising experience for someone to go through alone. The support session also made feel like I was not alone, and many women are going through similar experiences

About the support group:

We welcome sufferers and those close to them. We have guest speakers and more informal meetings to provide information. The support and understanding that comes from just being around other women with endometriosis is amazingly valuable. We hope to create a confidential, caring environment. Our private Facebook group is really active and can be a great place to find some information and support at any time of the day or night. We also do profile raising and fund raising work when we can. We look forward to meeting you in person or on Facebook!  @EndoShef.   endoshef

Our evening meetings are on the 4th Tuesday of the month. They are held in the Community Room, Morrison's Supermarket, 699 Penistone Rd, Hillsborough S6 2GY Come into the store by either entrance and turn right - staying between the checkouts and the outside wall. Go past all the checkouts and there is a corridor on the right hand side which leads to the community room. The staff will be able to help if you get lost, just ask someone, they're really helpful in our experience. There is also lots of free parking right outside.
The group leaders arrive around 7pm for an evening meeting and the meeting starts properly at 7.15pm, finishing by 9pm. Hot drinks are available.
Our informal socials happen in various places so please check the individual meetings details for these.