We recently caught up with Laura and Leo  at Bear Hut Brownies, who held a Tea for Endo event in October. Read on to find out what they got up to and what motivated the team to get involved.

We’re so grateful that you have chosen to take part in Tea for Endo through your business – such a great way to raise awareness of endometriosis in the workplace and with your customers whilst also raising funds to make a difference in the lives of others with the disease. What motivated you and Leo to get involved?

Laura: Thank you, we have wanted to do something like this for such a long time, as it is something that is so important and prominent in both our lives. I first found out I had endometriosis in 2018, I had no idea what it was and didn't know anyone at the time who had it either. I really struggled to find much information on it that would be able to help me understand. The level of care I received at the time unfortunately wasn't great and I left feeling a bit lost and confused with what it meant for me going forward.

I have since met some wonderful people who also suffer with endometriosis, but having the support there from others is such a help - which is what we wanted to achieve by doing Tea for Endo, to hopefully bring people together and break the silence. We met some lovely people over the weekend and I discovered support groups local to the area and have a few ideas rolling around for meet ups with brownies.

Could you tell us a little bit about your journey with endometriosis? Leo, how did you hear about endometriosis and what are your thoughts on the level of awareness right now?

Laura: I had no idea endometriosis even existed until I was diagnosed. I was going to the doctors for around 6 years beforehand with debilitating pain, bad periods and fatigue before I eventually got somewhere. Each time I went to the doctors, I was told it was normal, or just bad period pains. I was finally referred to a gynaecologist after struggling to get pregnant, but even then, it wasn't an easy process. I finally had a laparoscopy which is when I had my diagnosis. Both of my ovaries were covered, one was completely trapped, it was all around my bowel, womb and back. It was almost a sense of relief to know that I wasn't going mad, and that there was actually something wrong - but I struggled with what it actually all was.

During the surgery, they also misdiagnosed me with a hydrosalpinx on my right fallopian tube, which would have meant I needed it removed. I went to private hospital for the procedure where they luckily found it to be a unicornuate uterus, that in itself was another thing I struggled to deal with - but now thankfully both tubes are still place. I have since had another laparoscopy, which was in May 2021. This time it felt a bit easier mentally as I knew what to expect and hopefully would have reduced pain afterwards.

Having the business really helps me as it makes me a lot more positive around that time. I feel so lucky to do something that I really love, as well as have Leo around who is so supportive and understanding of it all. Now that the business is expanding we have two amazing bakers alongside us, which gives me the flexibility knowing that if I need time away, I can take it - not that I accept it much, I am a bit of a workaholic!

Leo: I first found out about endometriosis when I met Laura. I didn't know anything about it before, I think it is a horrible thing that she and others go through. The level of awareness around endometriosis is so minimal and as individuals and small business owners, we really like to align our personal views and beliefs to the business where possible. Holding the event was extremely important to Laura, but to myself also. I really hope that we have helped to raise more awareness over the weekend and really helped to spread to word.

If there was one thing you would want every customer to know when they leave with a hot drink or brownie during your Tea for Endo, what would that be?

​Laura: That it is okay to talk about endometriosis. I spent so long trying to hide my symptoms, pretending everything was okay and feeling embarrassed about what I was going through - but no one should feel this way. By talking about it, more people will become aware, which will help everyone. It really isn't talked about enough and that needs to change.

What’s been the highlight for Bear Hut Brownies taking part in Tea for Endo?

Laura: The highlight was definitely meeting so many wonderful people - they have shown us support groups and meet ups in the local area, which I didn't know existed. It was so nice to see everyone come together to help support the weekend.

Do you have any tips or advice for other businesses who might be considering fundraising for Endometriosis UK?

​Laura: Just go for it! If it is something that you want to do and feel passionate about - do it. We weren't sure how to go about fundraising, with us being a business, we eventually decided to donate all proceeds from every hot drink as it seemed to fit well with the theme of the event, the coffee machine had more use than ever that weekend!

I was so worried about how the weekend would go, but it was an absolute success. We had people coming in who had never heard about endometriosis, so that was great to help spread new awareness. We also had people coming in who didn't know about our business, but had seen or been told about our fundraiser - so it was just so lovely to bring everyone together. It was a really emotional weekend for me, every time someone donated or wanted to order a hot drink I could feel myself getting goosebumps and welling up. It was so rewarding to know that we have helped in some way, so I would 100% recommend!

Feeling inspired? Find out more about holding your own Tea for Endo here! 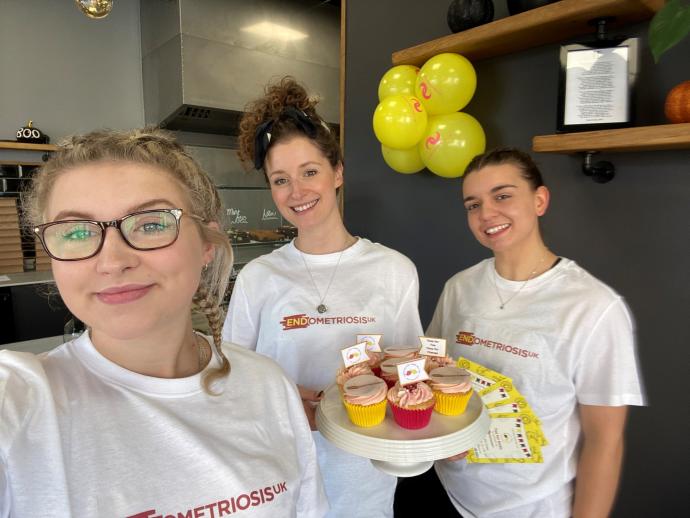