Miranda shares her fertility journey including the loss of her first baby and an IVF pregnancy after loss.

I started my period when I was 12. They were always painful and heavy. I have a distinct memory of putting a tampon in and going to a drama club and by the time I got there it was soaked through. My mum took me to the GP and I was given pain relief. Then when I was 14 I went on the pill which just ended up masking my problems.

I got on with my life but when I was older I started experiencing painful sex. I also started having issues with my bladder – I was regularly having infections and always needed the loo. I was always run down, tired or unwell with something. From the first moment I started my period to the point at which I was offered a scan was a period of 10 years. I was 23 when I had my first internal scan and I finally saw a doctor who took the initiative to think about my situation laterally.

The scan revealed that I had a huge cyst on my ovaries which was 8cm long and the doctor said I needed a laparoscopy. I had the surgery in June 2018 and it had to be extended by hours because, to quote my doctor: I was “a mess inside”. He had a daughter my age and told me that he felt compelled to do everything he could to help me. So put all my trust in him because he was the first person to listen and take me seriously. He said I had a severe case of Endometriosis and my fallopian tubes were crushed. He removed everything he could, I continued to use pain relief and sex stopped hurting for a while.

In 2019 I met my fiancée Tristan and the pain during sex returned. I stuck it out for a while then went to see a doctor who told me that that I was fine, but I was sure something was wrong, and later I discovered that I had ruptured a cyst. I had a second laparoscopy and that’s when a discussion about fertility came up. My egg reserves were extremely low and I found out my fallopian tubes were blocked. I got medically diagnosed as infertile and told IVF would be our only hope of having children.

We planned to start IVF at the beginning of 2020 but then Covid happened and it got cancelled. That was fortuitous because I got pregnant naturally which my consultant said was a miracle. We lost her at 18 weeks and that was awful. I started talking about the miscarriage on Instagram as a way to process the pain and because so many women go through it.

Then in March 2021 we had our first round of IVF and it worked. I feel so very lucky because a lot of women go through several rounds and it doesn’t happen. I’m still scared. When you go through a miscarriage at 18 weeks It’s always at the back of your mind. But I’m also trying to stay positive and hopeful.

That’s why I’m passionate about people being diagnosed sooner. Endometriosis has to be taken seriously because it’s a full body disease. It’s not just painful and heavy periods. I wish someone looked at everything going on in my medical history and pieced it together earlier. People weren’t looking at the bigger picture. There needs to be more research and education to help.

I was a young girl and I think that was part of the reason why I wasn’t taken seriously. I want people to feel they are heard because you’re told too often that there’s nothing wrong so you doubt yourself, and that’s the most isolating thing. I don’t want people to have to go through what I did. 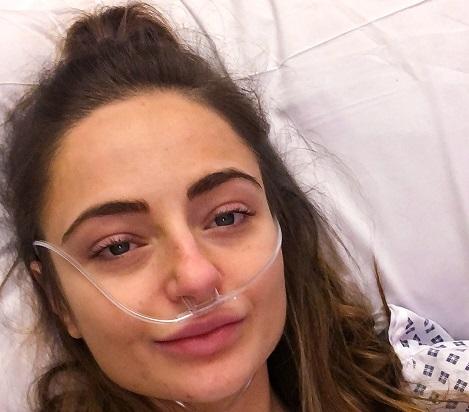